The C-TPAT Bait and Switch

March 19, 2009
I have absolutely no doubt that C-TPAT, the Customs-Trade Partnership Against Terrorism, makes America a safer place. Every participating importer, carrier, warehouse, foreign manufacturer, etc. agrees to take reasonable steps to insure the safety of the supply chain. This means, for example, limiting the access to shipping containers, using secure container seals, and vetting truck drivers. Logic dictates that C-TPAT makes it more difficult for a terrorist organization to slip weapons, components of weapons, or even people into the supply chain of an unknowing importer. I am glad that Customs has this program and I appreciate the efforts of the voluntary participants.
My problem is the way Customs sells the program. I've had the opportunity to sit through lots of C-TPAT recruitment sessions and they all proceed along the same lines. First and foremost, there is the reminder that the horrors of September 11 are the origin of C-TPAT. This, of course, puts the audience into a somewhat angry, hawkish, patriotic mood, which is the natural reaction to being reminded of a recent terror attack on our home soil.
That is followed by images from London, Madrid, and now Mumbai.
We all agree; terrorism is evil.
But then there is a shift in the presentations. Customs shows the audience pictures from field enforcement seizures. These are mostly images from drug seizures. The pictures are very interesting and demonstrate the determination that drug cartels have to get their product into the U.S. We are shown modified modified gas tanks partly filled with drugs, individuals used as drug mules, and shipping containers with false walls behind which drugs are stashed.
Customs also shows graphic images involving human smuggling. A famous picture is of a woman literally hidden inside the dashboard of a car. In another, a man has somehow molded himself into a car seat. A slide shows seized explosives found in a child's backpack. 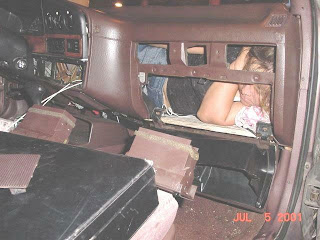 Lastly, to bring the message home, we see video. At a recent presentation, I saw video of an improvised explosive device engulfing what appeared to be a U.S. Army vehicle in Iraq or Afghanistan. The video was shot from inside the vehicle. It ends with an image of a shattered windshield and the sound of machine gun fire. A second video was introduced with a slide showing a U.S. land border crossing but then cuts to video of a checkpoint that again appears to be in Iraq or Afghanistan. A large truck approaches the checkpoint and then explodes in a huge fireball and massive shock wave.
We all understand the possible human horror and economic havoc that an attack in a U.S. port or inland point could produce. Everyone wants to work to prevent that. The companies taking voluntary part in C-TPAT understand the risks and have enlisted in the home front effort in the war on terror.
So why, does Customs and Border Protection have to sell C-TPAT so wrongheadedly? Not one of the shocking images used in these presentations appeared to be of a commercial shipment in which the importer was not part of the conspiracy. The driver of the car clearly knew the woman was in the dashboard. The person accompanying the child across the border knew the explosives were in the backpack. These are not the threats that C-TPAT is intended to and most likely does in fact address.
C-TPAT focuses on commercial shippers and reduces the risk that an unknown or unauthorized third party uses that supply chain as a means of delivering a weapon of mass destruction. That is wholly different than a drug cartel using a poor person as a human drug mule.
If Customs really wants to effectively sell C-TPAT to companies not presently participating and wants participating companies to understand the value of their commitment, it should change its pitch. CBP needs to better recognize that it is usually speaking to a sophisticated business audience that wants to help Customs in its counter-terrorism role. If there are examples of Customs and Border Protection interdicting drugs, weapons, or people from commercial shipments where the importer was not involved in the criminal activity, those are the examples the trade needs to see. As it is, I fear CBP is undermining its own credibility. Personally, I watch these presentations and come away with the distinct impression that Customs is playing a bait and switch game.
C-TPAT is an important element in our national anti-terrorism strategy. It should not take much to sell it as such. By having companies voluntarily secure their own supply chain, CBP has the opportunity to focus its resources on the risky shipments. That needs to be the message. As it is, CBP is just showing pictures that don't seem to relate to the audience.
UPDATE: Does this story about Union Pacific prove me wrong? No, because my point is about the way CBP markets the program, not the program itself. The story does show that Customs want carriers to be responsible for what is in their conveyances. I'm not sure what UP can do other than work with its Mexican partners to try and secure the rail yards. Given the environment in Mexico at the moment, I would not want to be the guy having to be on the lookout for drug smugglers.
C-TPAT Cargo Security Customs Law

Anonymous said…
Bait and switch exists because it’s the only way to sell products too imperfect to sell themselves. And anyone who’s paid attention to my ravings of late knows that I don’t agree with you on C-TPAT efficacy.

C-TPAT participants have been caught employing illegal aliens. Contraband has been found unwittingly secreted into their shipments. So if the C-TPAT participants can’t police themselves, how will C-TPAT stop a terrorist, whose ROI is impact, and will score more points when a C-TPAT container is their vehicle?

Neither are the benefits real. When the borders close again, no truck will be able to get through the 35 km traffic jam to reach the quarter mile of FAST lane, and C-TPAT shipments can’t be unloaded when the non-C-TPAT cargo keeps the ships 200 miles out in international waters.

Anonymous said…
In response to Jim, perhaps the measure of efficacy is the paucity of incidents CBP can cite to sell the program. (No, I'm not a CBP mole.) I recall the policy debates that were waged after 9-11, about how the border protectors could address such a huge gap in security quickly, without resorting to the populist and wholly implausible "solutions" Congress eventually grabbed, like 100% screening. They came up with CTPAT, which has only one critical concept: "partnership". It was based, at first, on patriotism, and later, on legitimate trader's aversion to "standing out" by refusing to participate, and finally, on the presumption that once-voluntary guidelines will become mandatory regulations, so you might as well get certified. None of that psychological sales approach ever guaranteed real "partnership" between the enforcers and the trade, and it clearly doesn't offer the participants many quantifiable "benefits" to their business. I think all it was intended to do was motivate traders to actually think about securing their own supply chain in a structured manner, far beyond what the enforcement authorities could do.

The actual bait and switch (a more measured description might be "unfulfilled promise") is what Jim avers to -- DHS assurance that there will be benefits for the businesses who participate, a promise which is necessarily illusory.

I agree with Larry that they should stop relying on visual images which are unrelated to supply chain security breakdowns. Or maybe they should talk more about how few CTPAT secured incidents there have been, which lets them focus enforcement resources on these intentional breeches. And definitely get rid of the IED military visuals. Those guys deserve all of our attention in ways far more profound than CTPAT sales videos.
Mar 21, 2009, 11:53:00 AM

Anonymous said…
Good points, Matt. But a paucity of incidents is not necessarily an indication of efficacy. Otherwise, I'll take credit, thank you very much, for the lack of tsunamis in Kansas.
Mar 23, 2009, 9:28:00 PM