Showing posts from August, 2005
Show all

August 26, 2005
I don't really do sports metaphors, but this one seems to make sense. There is an ongoing prize fight in the usually sleepy area of duty-free stores that is worth mentioning if only because it highlights the fact that Customs (or the Justice Department) can sometimes get obsessed with an issue that does not seem to fit into the big picture. In this corner is Ammex, Inc., which operates a duty-free store and gas station at the Ambassador Bridge between Detroit and Windsor. Not far from the Joe Louis Arena. Because of the way the roads work, there is no way for a car to enter from the U.S. side and return to the U.S. without passing through Canada (if only for a moment). So, everything purchased from the the store is destined for exportation. It just is. Here is a map that kind of proves it. In the other corner is Customs, which, in 1994, denied Ammex's request to be permitted to sell motor fuel at its duty-free store. Customs said because fuel is a fungible item, there is no
Post a Comment
Read more

Death of a Lobster

August 16, 2005
One of the reasons customs law is an interesting practice is that you get to learn about a lot of different products. Sometimes, you learn about things you'd rather not. For example, Customs ruled, NY R00821 (Oct. 19, 2004), on the classification and country of origin of frozen raw lobster meat from Canada. Here is how Customs describes the process: They are put into a machine that kills them, using hydraulic pressure to release the meat from the shell. The dead lobsters are separated into different parts, --i.e., separated into knuckles, claws, tails and bodies,--each of which is processed separately. The raw meat is removed from the leg by using rollers, from the knuckles using compressed air, from the claw by opening with a knife, and from the tail by scoring the shell with a blade and then pulling the meat out. After removal, the knuckle and claw meat is mixed together, weighed and put through a vacuum packaging machine. The leg meat is weighed and similarly vacuum packaged. E
1 comment
Read more

My Love/Hate Relationship with Technology

August 11, 2005
PUBLIC VERSION DELETED APO INFORMATION IS [BRACKETED] I love technology. I also hate it. It is an evil enabler of my base self. Before you start wondering what I have been downloading, let me set the scene. Today, I am in [the south, the deep south]. I am visiting [a great client] here in [a place I shall not disclose]. It is [south] and it is [rural]. I have been here almost 12 hours and I can't recall seeing a foreign car. Many of the towns around here are so small that the population [is in the two digits range]. [The client I am visiting] is in a town [requiring four digits to advertise its population]. The person who checked me into the hotel was proud of the fact that, since my last stay, they have added an elevator to this two-story building. I really don't care much about that. I am, however, very happy to report that they have also added free wireless broadband. She was also very proud to tell me that I am here just in time for the venerable [Local Crop] Festival. D
Post a Comment
Read more

August 10, 2005
I just discovered via Evan Brown, the blogger at Internet Cases.com , that my own blog was Blog of the Day on July 30 at the Inter-Alia blog . Well, how about that? Thanks to Tom Mighell for the nod. Both you guys deserve a link from me (which you now have).
Post a Comment
Read more 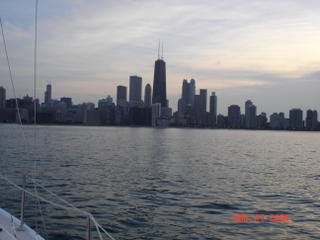 I have spent the last several days engaged in American Bar Association activities. Up until yesterday, I had been the Co-Chair of the Customs Law Committee in the Section of International Law. I have held that position for about three years and am now going to move to another role within the Section. I still do not know exactly what that role will be. But, in a lot of ways, the ABA is a great organization and I am happy to do my part. Having the meeting in my home town of Chicago made it even better. I spent a fair amount of time giving advice on what museums to visit ( the Art Institute ), where to get good pizza , seafood , and the best Mexican food . I was directly involved in two programs. The Customs Law Committee sponsored a meeting on the issues relating to the re-importation of prescription drugs. This turned out to be a really good discussion. The panel consisted of an M.D. from the Board of AARP, a Canadian consultant to the pharmaceutical industry, a former FDA official
Post a Comment
Read more

August 02, 2005
I'm not sure there is much to say about this except: "Oh, my!" There are plenty of big companies all over the country breathing a sigh of relief that this happened to Ford and not to them. What happened is that Ford got hit with a $20 million penalty for failing to properly declare the value of imported merchandise. The decisions of the Court of International Trade (there are two, reported here and here ) are interesting reading. Basically, Ford entered merchandise and failed to mention to Customs that the declared values were tentative. They never got around to notifying Customs of the correct final values even though they apparently understood that they were supposed to do so. The merchandise ended up being under valued and duties were under paid. Ford had a not unreasonable argument about the transaction value being the price paid or payable at the time of export, so it was properly declared. Heck, I have used that myself. But, in this case, everyone knew the price
Post a Comment
Read more
More posts