Showing posts from March, 2013
Show all

March 27, 2013
Kirtsaeng, discussed in this prior post , was not unanimous. Justice Kagan wrote a concurring opinion in which Justice Alito joined. Justice Kagan's main point is to recognize that the Court's decision significantly narrows the ban on the unauthorized importation of copyrighted works found in 17 U.S.C. § 602(a)(1). She believes, however, that the source of that problem is not the decision in Kirtsaeng, but the prior decision in Quality King v. L'Anza, which upheld the notion that the first sale rule trumps the ban on importation. Justice Ginsberg wrote a dissenting opinion in which Justice Kennedy Joined and Justice Scalia joined in part. In Justice Ginsberg's view, the Court should not have embraced the theory of international exhaustion of copyright. Further, the dissent suggests that the "parade of horribles" the majority envisions are largely imaginary. Regarding the scope of the first sale doctrine (i.e., "exhaustion"), the dissent notes t
Post a Comment
Read more

Link Snacks, Inc. v. United States  is a straight forward and very frustrating case from the Court of International Trade. The sole question is whether beef jerky made of dehydrated cured beef is classifiable as cured beef (1602.50.09, 4.5%) or as other beef (1602.50.20, 1.4%). The problem for the plaintiff is that the beef is undeniably cured and that not all beef jerky is made of cured beef. Further, there is no tariff item specifically addressing dehydrated beef or beef jerky. Thus, the alternative is between an eo nomine classification for cured beef (which this is) and a basket provision for other beef (excluding corned beef). Given that "other" means beef that is not cured or pickled and that this jerky was cured, the plaintiff had a tough case. Plaintiff made several solid arguments about the essential nature of beef jerky. What turns a meat into jerky is not curing. Rather, it is the dehydration that turns it into the well know tough strips of meat leather beloved b
Post a Comment
Read more

When are Pants Not Pants?

March 26, 2013
This has been an interesting issue for a while now. It started when the Court of Appeals for the Federal Circuit declared that hockey pants with built-in pads were not classifiable as wearing apparel, but as hockey equipment. That was in a case called Bauer Nike Hockey USA, Inc. v. United States , back in 2004. At that time, I was pretty certain that a lot of sports-specific clothing was going to end up classifiable as sports equipment on the basic premise that it is not easily or comfortably worn in other settings and is necessary or appropriate for participation in the sport. Unfortunately, the Federal Circuit had other ideas. In Lemans Corp. v. United States, the Federal Circuit held that motocross jackets were not sports equipment because, unlike the hockey pants in Bauer Nike, they did not incorporate protective pads or guards. Recently, the Court of International Trade had to wrestle with the classification of football pants and jerseys in Riddell, Inc. v. United States. Th
Post a Comment
Read more

March 20, 2013
The background to Kirtsaeng v. John Wiley & Sons, Inc. is interesting. This is a copyright case involving the unauthorized importation of textbooks. Wiley is a publisher of textbooks in both the U.S. and various foreign markets. Some of the books it sells in foreign markets are produced abroad and contain notices stating that the books are intended only for sale and distribution in specified non-U.S. markets. The notice further states that exporting the book to an unauthorized market, presumably including the United States, is a violation of the publisher's copyright. Supap Kirtsaeng was a Thai student in the United States. To supplement his income, Kirtsaeng asked friends and family in Thailand to send him English-language versions of textbooks offered for sale in Thailand at prices that were lower than the price for a comparable book in the United States. Kirtsaeng would then resell the book, reimburse his supplier, and keep the profit. This is a fairly typical example of
2 comments
Read more

March 19, 2013
On March 18, the Supreme Court issued a decision in Kirtsaeng v. John Wiley & Sons. The Court held that the first sale doctrine of copyright law applies to works made abroad. This means that importers can purchase legitimately made copyrighted works abroad and import them without the permission of the copyright holder. That is good news for retail companies that import legitimate products through parallel channels. Analysis to follow.
Post a Comment
Read more

At Last! We have solved the Kinder Egg Crisis

March 17, 2013
Since 1938, chocolate eggs molded around a toy surprise have been illegal to import into the United States. These items are deemed too dangerous for kids due to a potential choking hazard and also the toy is in direct contact with the food, which upsets the Food and Drug Administration. Today, we are happy to announce that an entrepreneur has solved the problem of the banned Kinder Egg. Behold the Choco Treasure . Using good old American engineering know-how, the Choco Treasure satisfies both the Consumer Products Safety Commission and the Food and Drug Administration by encapsulating the toy in a plastic holder inside the chocolate egg, which separates when eaten to reveal the contents. I am certain that the folks at Customs and Border Protection are happy to see this advancement in science. Every year, the agency publishes notice that the Kinder Egg is contraband and seizes many at the border. Good going Choco Treasure. More here.
Post a Comment
Read more

Patents Sneak into the Court of International Trade 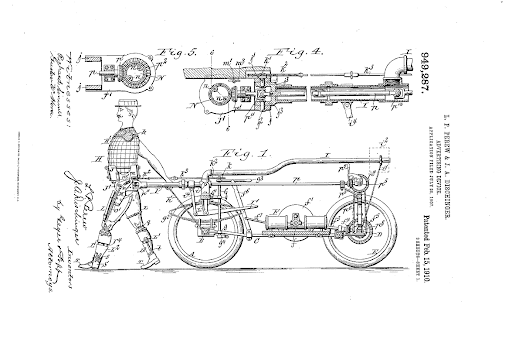 I have been sitting on Corning Gilbert for a while. But, it is time we tackle it. First some background. I fascinated by intellectual property law and initially planned to practice in that area. I even spent a little time in a firm doing copyright work. But, I had the great opportunity to clerk at the Court of International Trade and never looked back. Except that I did manage to get an LL.M. in Intellectual Property Law. Today, I get to exercise that knowledge and interest in cases involving the border enforcement of intellectual property rights by U.S. Customs and Border Protection. That almost always means copyright and trademarks. But, there are occasions when patent issues creep out of the International Trade Commission and into the Ports or the Court of International Trade. Corning Gilbert is one of those. The case involves a decision by Customs and Border Protection to exclude certain coaxial cables from the commerce of the United States on the grounds that the connectors a
Post a Comment
Read more

March 11, 2013
Just because Customs and Border Protection rejected an importer's attempted entry of merchandise, that does not mean it was "excluded" for purposes of filing an administrative protest. That is the lesson of Sunshine International Trading v. United States. Sunshine is an interesting case in that the plaintiff asked the Court of International Trade to review the denial of a protest concerning the rejection of an entry. Keep in mind that a rejection is not a liquidation, meaning that it is basically Customs telling the importer to resubmit the (usually virtual) paperwork for some reason. In this case, it was because the invoices did not properly describe the merchandise and Customs believed that the reported value was incorrect. Sunshine filed a protest challenging the rejection of its entry of women's jeans. Apparently, the focus of the protest was on the reappraisal of the jeans from $2.70 per pair to over $6 per pair. Customs denied the protest in full and also s
Post a Comment
Read more
More posts