Showing posts from July, 2006
Show all

CBP Slugs It Out

July 27, 2006
An Agricultural Inspector at the airport in Seattle intercepted a slug that had stowed away in a container of Bulgarian mushrooms. This, however, was not your typical harmless Bulgarian slug. Apparently, it is the Lex Luther of slugs--the voracious Lehmannia nyctelia . This particular slug also carries nasty crop viruses. So, nice catch by the inspectors. Read all about it here . All of which serves as a nice reminder that import compliance involves a number of agencies including the Department of Agriculture, the Animal Plant Health Inspection Service, Food & Drug, etc. Customs and Border Protection, by enforcing these agencies' rules, plays an important role in securing the food supply not just against intentional tampering but also from inadvertent threats such as slugs. This sometimes has more immediate and practical consequences than one might expect. Here in Chicago, we lost many old trees to the dreaded Asian longhorn beetle . Now, we are loosing ash trees to t
1 comment
Read more

July 27, 2006
Remember when this blog was about customs law? It will be again soon. In the meantime, I was thinking about a post on the Tour de France and how kids in America have never before had the opportunity to have a hero named "Floyd." Mayberry jokes would have followed. But, now I see this . Let's hope it is not true.
Post a Comment
Read more

July 21, 2006
Cycling in on Friday, I hit a red light near a woman selling tamales from a cooler and a push cart. Given that she may be violating a number of laws, I will not specify where. Someday, when I drive, I am going to stop and load up on her tamales. They must be good because her sign says "El Mejor de Guerrero." She has about a dozen varieties including cheso con jalepeno, which is what I most want to try. Others include beef, pork, and pineapple. Guerrero is a long way from Chicago. It lies between Oaxaca and Michoacan on the pacific coast. I know nothing about this woman. She is around 60 and looks like she has had a rough life by North American standards. She may be younger. I don't know how she found herself in Chicago or whether she is legally here. Let's assume she is illegal. In addition, she probably pays no taxes, has no local business license, and no health inspection certificate. OK, technically, that is all bad. But, is it really? The federal, state, count
5 comments
Read more 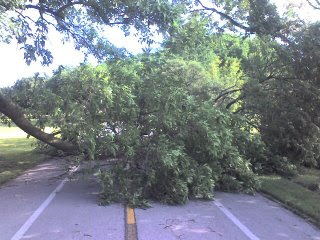 According to smarmy Phil Keoghan , a road block is a task only one person may perform. Last night, pretty strong storms came through. This morning, I rode my bike to work. Through the magic of the Treo 700p camera, I can show you a real road block. This one is around Foster on the Lakefront bike path. Also sighted on the ride today: A guy running in what looked like a pair of ski boots with leaf springs attached at the bottom. They looked as if they had come from the Hanna-Barbera workshop. I have no idea what these are called and I can't find a picture to illustrate them. A woman riding a Trek 730 with a milk crate basket on the back. Attached to the basket was a license-plate style sign emblazoned with the slogan "Bicycling: A quiet statement against oil," or something similar. She was impressively fast. UPDATE: They are called Kangoo Jumps. You be the judge.
Post a Comment
Read more

July 14, 2006
According to this article from Chicago's paper of record, Senator Vitter of Louisiana has introduced a measure requiring CBP to allow the the importation of prescription drugs by individuals. The proposal is an amendment to the Homeland Security appropriations bill.
Post a Comment
Read more

The Fine Art of Customs Law

July 13, 2006
The GranneBlog has a fascinating post on a piece of customs law history relating to the tariff classification of abstract art. So, consider this an annotation to that otherwise fine post. Given the excellent library of honest-to-goodness paper and leather books in my office, I was able to find the relevant decision , which is Brancusi v. United States , T.D. 43063 (1928). It includes a picture of the sculpture as well. Sorry for the poor scan. Keep in mind that it is a black and white photo from 1928.
2 comments
Read more

I Need To Open A Book Now and Then

July 12, 2006
It occurred to me that it would be wise to actually take a look at the Administrative Procedure Act in reference to my prior post regarding the UPS case . Guess what? It now seems I may have been a bit too quick to blog. This is what the APA actually says: To the extent necessary to decision and when presented, the reviewing court shall decide all relevant questions of law, interpret constitutional and statutory provisions, and determine the meaning or applicability of the terms of an agency action. The reviewing court shall— (1) compel agency action unlawfully withheld or unreasonably delayed; and (2) hold unlawful and set aside agency action, findings, and conclusions found to be— (A) arbitrary, capricious, an abuse of discretion, or otherwise not in accordance with law ; (B) contrary to constitutional right, power, privilege, or immunity; (C) in excess of statutory jurisdiction, authority , or limitations, or short of statutory right; (D) without observance of procedure requi
Post a Comment
Read more

July 08, 2006
Full of more juice than a Barry Bonds' healthy breakfast. According to the August Bicycle magazine, the new golf. According to that same magazine, the new Nascar. Take your pick. Also in the media, the Friday (7/7/2006) Wall Street Journal had an interesting article on the new popularity of track bikes, also called fixed gear bikes , or "fixies." These are the most basic bikes around. They have no gears and no ability to coast. When the bike is rolling, the chain is turning, and the pedals are moving. That means your legs are moving as well. Riding a fixie, therefore, takes a certain amount of finesse most riders people develop on the track. They also became popular among urban bike messengers because they are light, relatively inexpensive, and easy to maintain. Bike messengers and other urban fixies learn to ride these things with a high degree of confidence, but it takes time. Why? Because a lot of fixies HAVE NO BRAKES! Look here for an example. Stopping
Post a Comment
Read more

Spin the Wheel of Standards

July 06, 2006
UPDATE: Don't Be Fooled. Read this too! We all know that importers are ultimately responsible for the legal accuracy of their entries. In most cases, it seems that Customs generally looks to the importer no matter how egregious the broker error. But, that is not always the case. Brokers are sometime the subject of enforcement actions. That is what Judge Carman’s case U.S. v. UPS Customhouse Brokerage, Inc. is about and brokers are not going to like the outcome. Here is what you need to know: In 2000, CBP hit UPS with three pre-penalty notices for its alleged failure to properly supervise and control the customs business it conducts. Eventually, Customs issued penalty notices and UPS paid $15,000 in penalties. CBP followed up with an additional five pre-penalty notices, which became five penalty notices and a demand for an additional $75,000. UPS refused to pay and got itself sued. So far, so good. This looks like a normal penalty case. But, it is not because brokers are not imp
Post a Comment
Read more

What Do You Want From Me?

July 05, 2006
Right now, I am having editorial issues. Frankly, I have a bunch of blog-worthy material piled up. I need some time to sort through it and decide what to address. Or, in the alternative, I might do a series of very quick summaries and send you on your way with a link. It depends, I guess, on how I feel. For one thing, keep in mind that the web site of my law firm, Barnes, Richardson & Colburn , covers a lot of this in a more timely manner. I encourage you who visit here, to make a habit of visiting there regularly. So, I will leave it to the crack web master at BR&C to cover the news that Customs has extended the deadline for filing a C-TPAT supply chain security profile to October 1. Another interesting thing happening is a renewed focus on intellectual property enforcement at the border. Customs made an announcement that it is working to support the US-EU Action Strategy for the Enforcement of Intellectual Property Rights . At about the same time, the new USTR announced
1 comment
Read more

July 05, 2006
Rush Limbaugh will not be charged for illegally importing the prescription drug Viagra. And so another great customs law story peters out . . . so to speak.
Post a Comment
Read more

July 03, 2006
No big news over the long weekend. Just a couple links worth posting. The first relates to modern vexillology . I have always had a passing interest in national flags and hate when I can't identify a country by its flag. One of my favorites is Saint Lucia . It is clean and modern, bordering on the Star Trek-ish. Some clever person over at Google Blogoscope realized that the internet transcends national borders and we now need internet flags. I particularly like number 4 for Bulkmail Solutions. The second link is in the category of best e-commerce site selling cookies made by the guy who remodeled my kitchen. The cookies are good, really. Happy Independence Day.
Post a Comment
Read more
More posts