Showing posts from February, 2014
Show all

Protests Must be Filed in the Correct Port

February 21, 2014
The U.S Court of International Trade has sent an important reminder (or three) to importers who hope to have their liquidations reviewed administratively by Customs and Border Protection and then judicially in the CIT. Follow the rules. And, follow them the way Customs interprets the rules. In Netchem, Inc. v. United States , the plaintiff imported something known as lanthanum oxide . Originally, Customs classified the merchandise as certain rare-earth oxides of 2846.90.20, which are duty free. Subsequently, Customs reclassified the merchandise under 2846.90.80 as other compounds or mixtures of rare-earth metals, which has a duty rate of 3.7%. Clearly, this did not please Netchem, which filed a protest with the Port of Buffalo. Of the 56 entries covered by the protest, only 26 had liquidated when the protest was filed. Further, some fraction of the entries were filed at ports other than Buffalo. The Port of Buffalo denied the protest noting that it included entries from other ports
Post a Comment
Read more

February 19, 2014
Today, the White House published an Executive Order designed to streamline trade by completing the International Trade Data System. This system, when completed, is intended to provide a single electronic window for importers and exporters to provide all the data necessary to process shipments for all the participating agencies. Here is a link to the White House announcement .
Post a Comment
Read more

February 12, 2014
I wrote this a few days ago and thought I published it. Sorry about that. I have been sitting on two decision from the Court of International Trade for a while. I will now act like a grownup and get one of them off my virtual desk. United States v. American Home Assurance Co. is, as you might guess from the names of the parties, an action by the government to recover unpaid antidumping duties from a customs bond surety. In addition, the government is trying to collect both equitable prejudgment and interest pursuant to 19 USC 580. The case involves unpaid antidumping duties on crawfish tail meat form China. As the surety, AHAC is jointly and severally liable for unpaid duties up to the amount of the bond, which in this case was $600 thousand. At the time the importer entered the merchandise, it declared a zero percent rate in the dumping case. Subsequently, Commerce determined that the applicable liquidation rates was 223%, ad valorem .  Customs and Border Protection demanded $1
Post a Comment
Read more

February 12, 2014
The White House has announced new measures to protect elephants by clamping down on trade in ivory. The announcement and links to the details are here . Apparently, this is a preemptive announcement to show leadership on the issue in advance of an upcoming international meeting on the subject. On that front, the White House says: At this week’s London Conference on the Illegal Wildlife Trade, we hope other countries will join us in taking ambitious action to combat wildlife trafficking.  In the coming months, we will take further steps to implement the National Strategy, and will work with the Congress to strengthen existing laws and adopt new ones to enhance our ability to address this global challenge.
Post a Comment
Read more

Federal Circuit is Messin' with Sasquatch 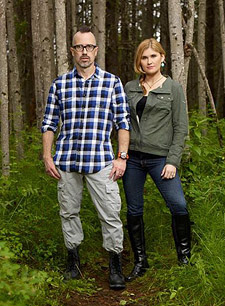 You may not know that I am endlessly fascinated with cryptozoology, the hunt for creatures heretofore unrecorded by professional scientists yet ardently chased by mostly amateur adventurers. Of the big three such creatures, the Loch Ness Monster seems to be fading from the zeitgeist. That leaves the Himalayan Yeti (and all of its Asian cousins) and the North American  Bigfoot. Recent DNA research by an apparently reputable professional scientist indicates that at least some alleged Yeti material may actually come from a sort of absurdly rare  hybrid polar bear previously thought to be extinct. That's a fascinating possible discovery by a real scientist and stands in stark contrast to the decided lack of success by so-called professional Bigfoot hunters. Bigfoot, AKA Sasquatch, is absurdly camera friendly, at least in the form of fleeting thermal spikes, pixilated blobs, tree knocks, and hoots recorded by numerous "documentary" television programs. My newest favorite su
Post a Comment
Read more

A New York man has pleaded guilty to importing piranhas into New York in violation of state law. To make matters worse for him, he instructed his supplier in Hong Kong to mislabel the fish as benign silver tetras, a common aquarium fish. That created a Lacey Act violation as well. Here are the details .       And, while I have your attention, I know I am already behind by a few court decisions. I will catch up soon. It's been a hectic few weeks.﻿
Post a Comment
Read more
More posts