Showing posts from October, 2008
Show all

October 28, 2008
Greetings from Canada! I am up hear to speak at the IECanada conference tomorrow. I wish I had more time to stay, but I am doing a travel hit and run to Toronto. I need to be in Chicago on Thursday to speak at a World Trade Center NAFTA event. It's nice to be asked, but October has been a little ridiculous. On the plane, I read a couple rulings that I found interesting. First, H021886 : The facts are the kind of oddball thing that only comes up in this area. None of my friends out there writing contracts or litigating injuries will ever see a case like this. Here is how Customs and Border Protection describes the merchandise: The merchandise at issue is identified as the "Maison Tropicale." It is a structure constructed from sheet steel and aluminum. It was designed by the French architect Jean Prouvé in 1949 and produced in 1951. The Maison Tropicale was created in response to a French government-sponsored competition beginning in 1947 to develop ideas for low cost h
Post a Comment
Read more

October 15, 2008
Western Power Sports is one of those cases that just stinks of underlying policy issues. The gist is that Customs asked the importer to verify the origin of apparel it had imported. In response, the importer produced “delivery records, employee time cards, and other production-related documents.” After reviewing the documents, Customs found they failed to substantiate the origin claim and issued the dreaded Notice of Redeliver. Western Power protested and Customs and Border Protection denied the protest apparently stating that the documentation was falsified. In the Court of International Trade, Western Power claimed that the general denial of the protest without specifically listing the reasons for the rejection violated constitutional and administrative law rights. According to the Court, the constitution only requires that the agency alert the interested party to the issue and provide a reasonable opportunity for the interested party to object. Since the protest denial stated tha
2 comments
Read more

October 15, 2008
Miguel Delgao lost his brokers license when it was discovered that he had been part of a scheme to import liquor into a bonded warehouse where paperwork was prepared showing it was to be exported. But, instead of being exported, the liquor was diverted back to the U.S. without the payment of federal liquor taxes. Apparently, Mr. Delgado does not argue that his conviction on 14 counts of violating 26 U.S.C. § 5601(a)(11) was proper. He might, but that is not the point for us. What he argued at the Court of International Trade was that his felony convictions did not relate to the importation of merchandise nor did they arise out of the conduct of customs business. 19 U.S.C. § 1641(d)(1)(B). To cut to the chase, the Court disagreed . First, the fact that the plan was never to export the goods from the warehouse but to divert them to the U.S. commerce does not mean the plan did not involve exports. Rather, the statute only requires that exports be involved or closely related to the trans
Post a Comment
Read more

Cancel My Subscription to the Bulletin

October 15, 2008
The Customs Bulletin is a publication with a long and important history. Through the Bulletin, Customs and Border Protection provides notices to the trade regarding important decisions of the Court of International Trade, changes in policy, and new regulations. It also includes a bunch of mundane but important stuff like exchange rates. I’d venture to say that besides the Federal Register, the Bulletin is Customs’ most important and most “official” means of communicating to the public. If something is in the Bulletin, I’m willing to bet that Customs assumes importers are aware of it. In Travelers Indemnity v. United States , the Court of International has, as far as I can tell, let us all off the hook when it comes to knowing what is in the Bulletin. The facts are important here, so I will summarize. Travelers was the surety for an importer of televisions subject to an antidumping duty order. At the time of entry, the importer deposited estimated dumping duties 1.38%. Liquida
1 comment
Read more

October 08, 2008
Here is a link to a notice published today (10/8/2008) in the Federal Register.  In the notice, APHIS sets out its planned phase-in of Lacey Act enforcement. The notice says that APHIS is working with Fish & Wildlife to define crop plants and common cultivars, which are exceptions to Lacey Act reporting requirements.  In addition, the notice says that paper reporting will begin as scheduled on December 15 and that an electronic reporting system is planned for as early as April 1.  APHIS says there will be no enforcement actions for failing to file a paper declaration, although false declarations may result in prosecution.  After the electronic system is up and running, compliance will be phased in for groups of products based on a schedule APHIS has set. Beginning April 1, 2009 (assuming the system is in place), APHIS will require electronic reporting for HTSUS Chapters 44 and 6.  Beginning July 1, 2009 APHIS will add chapters 47, 48, 92, and 94.  Depending on how things are wo
Post a Comment
Read more 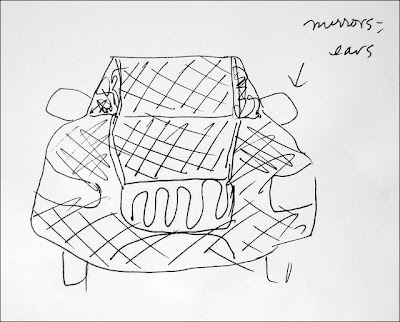 Look at this picture. It was in an artist's sketch book when she returned from Canada. Customs and Border Protection questioned her for an hour to determine whether she was engaged in copyright infringement. Based on that picture! I understand that what CBP was really worried about is corporate espionage. It's possible that the sketch was of some new and unreleased GM vehicle that she surreptitiously sketched at a proving ground in the wilds of Canada. But it's not. The artist had done the sketch as part of a project involving a crochet cozy to cover an entire SUV to illustrate something about the evils of foreign oil. Whatever. That's why we have artists. But is it credible that copyright infringement might have been involved? A copyright protects an original work of authorship stored in a tangible medium of expression, like a sketch on paper. It is infringement to copy the original work of someone else. Copying is defined as producing a work that is so similar t
1 comment
Read more

October 02, 2008
I am feeling a little guilty about the lack of substance and insight of late. I won't make excuses other than to say that I've had my head in a recently filed appellate brief, some travel, and other distractions. I do have some upcoming events that may be of interest. Preparing for these have been part of the distractions: On October 16, I'll be in NY helping with a CITBA program on courtroom skills. This should be a fun program. We are going to be doing mock-trial segments in front of Judge Wallach who will tell the us all what we did right, did wrong, or could do better. On October 29, I'll be in Toronto at the IE|Canada meeting to discuss customs valuation. Here are the details on that event. October 30, 2008 I will be speaking on NAFTA at a program near Chicago sponsored by the World Trade Center of Illinois. Here is a link to the brochure . Lastly, I'll be back in NY in November for the 15th Judicial Conference of the U.S. Court of International Tr
Post a Comment
Read more
More posts