Showing posts from March, 2020
Show all

Update on Tariff Engineering and the Ford Transit Litigation 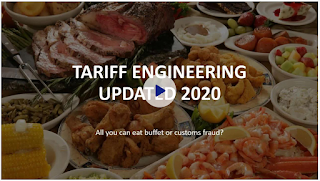 Here is a video recording of the presentation I had planned to do at ICPA in San Diego and that I recently did as a remote webinar for the International Trade Club of Chicago. If you are a trade nerd stuck in the house, you may find this interesting and useful. If there are family members stuck there with you, this may be a useful tool to get them out of the room. Note, this session is two hours long. Grab some snacks. Click the image.
Post a Comment
Read more

Country of origin continues to be in the spotlight as Customs & Border Protection exercises its enforcement authority for Section 301 duties on products from China and also on products subject to antidumping and countervailing duties. A lot of the discussion has been around China and what needs to be done to a product to legally establish another country as the origin. This is useful to avoid the up to 25% duties imposed on these products. But, the same considerations apply in the antidumping and countervailing duty context except that the stakes can be much, MUCH greater. It is not uncommon to see deposit rates and assessments rates in excess of 100%. In one case, as much as 1300% (I'm look at you, mattresses). The recent Court of International Trade case TR International Trading Company v. United States , looked like a vehicle to address some of these cases but ended up focusing more on CIT practice than on origin. The case involves citric acid imported from India, where it
Post a Comment
Read more

March 05, 2020
The Court of Appeals for the Federal Circuit decided an appeal from the Court of Federal Claims that may have a significant impact on origin determinations by Customs and Border Protection as well as future cases from the Court of International Trade. The case is Acetris Health LLC v. United States .  As background, the Court of Federal Claims is a federal court set up by Congress to hear claims by private parties against the United States in cases that might result in money damages. The Court can grant equitable relief in government contract bid protests and has jurisdiction over the vaccine claims process (which is a whole other story). Acetris is a bid protest case. The VA had been purchasing medicines from Acetris for some time. The drugs are produced in a facility in NJ that compounds the ingredients and then forms the material into pills of proper dosage. The active ingredients are made in India. The VA asked Acetris for confirmation that it was in compliance with the regu
Post a Comment
Read more

Federal Circuit Finds Section 232 is Constitutional, What Next?

March 02, 2020
On February 28, 2020, the U.S. Court of Appeals for the Federal Circuit denied a challenge to the constitutionality of Section 232 and the currently applicable duties on steel and aluminum products. The case, American Institute for International Steel  v. United States, was brought by a coalition of steel importers and  is available here . You may recall that AIIS tried to skip the Court of Appeals and move directly from the Court of International Trade to the Supreme Court. The reasoning behind that effort was that the Federal Circuit would likely find itself bound by a prior Supreme Court decision on the same issue. That case was Federal Energy Administration v. Algonquin SNG, Inc. In Algonquin, the Supreme Court addressed whether President Nixon had the authority under Section 232 to impose license fees on imported oil. Plaintiff's in the case argued that the statute was an improper delegation of authority from Congress, which has the constitutional power to regulate interna
Post a Comment
Read more
More posts